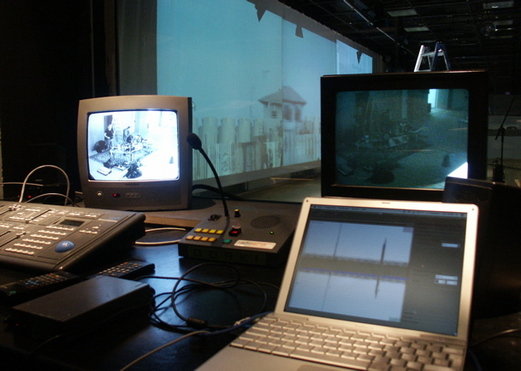 Scenic Panner is project, in which we are photographically collecting lots of items like buildings, objects, streets, plants, persons. These items are stored in one database. We assign them speed, an initial position and the depth in which these objects are placed in their new environment.

Once the database is correctly set up, the online version might be interactively controlled using a Macromedia® Flash Client. The installed version is on the way of being rewritten in c++ and openGl.

The Scenic Panner works also as an local installation. Several clients are aligned side by side and show their part of a large scale projection – together, they will form a wide panorama.
Since there are several clients running simultaneously, the objects are triggered using a server that sends, every time an object has to be moved, a message to the client. The
server itself is controlled by midi signals. That makes it possible for musicians, to use the Scenic Panner as a "visual instrument".